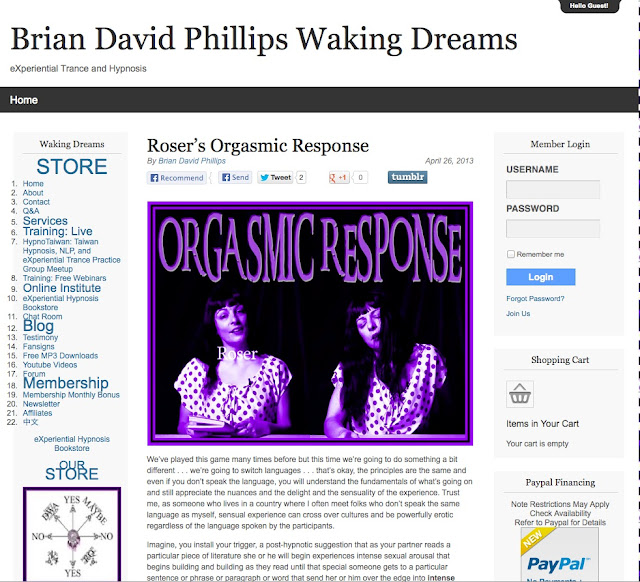 We’ve played this game many times before but this time we’re going to do something a bit different . . . we’re going to switch languages . . . that’s okay, the principles are the same and even if you don’t speak the language, you will understand the fundamentals of what’s going on and still appreciate the nuances and the delight and the sensuality of the experience. Trust me, as someone who lives in a country where I often meet folks who don’t speak the same language as myself, sensual experience can cross over cultures and be powerfully erotic regardless of the language spoken by the participants.

Imagine, you install your trigger, a post-hypnotic suggestion that as your partner reads a particular piece of literature she or he will begin experiences intense sexual arousal that begins building and building as they read until that special someone gets to a particular sentence or phrase or paragraph or word that send her or him over the edge into intense orgasmic EXPLOSION, an orgasm so intense it floods the entire mind, the body, the spirit with powerful orgasmic bliss . . . without a touch.
Wouldn’t that be an interesting eXperience to have?

Now, with that scenario in mind, watch this video of Roser Amills as she reads for this homage video to the Hysterical Literature series . . . she’s reading a passage from El carrer de les Camèlies written by Mercè Rodoreda . . . imagine that as she reads, you softly whisper her trigger word or use a special click click signal or even just gently, quietly look into her eyes and just ever so gently tilt your head a certain way to the left, not a lot, just enough to let her unconscious mind know that your gaze is engulfing her soul and inflaming her desire in a very special way, the way of The Erotic Gaze, so that she knows deeply and powerfully that the trigger has been fired, that there’s nothing she can do now but just surrender to the feelings as they wash over her . . . watch as her arousal opens, her sexual stimulation rises, her obvious physical sensations or erotic desire increase until she has to stop reading and must experience orgasmic explosion deep within herself . . . from a word, a look, a gentle touch. Do not read further until you have watched the entire video (if you like, click on the ol’ controls and watch in HD at full screen mode, you will be glad you did):

Now, I’m not a porn director, not even an erotica director . . . hardly, I’m a professor at an elite university in Taiwan so I suspect such things may be more than a whole lot off limits . . . but, I do find this program of interest and what struck me was not the hidden use of a wand. Such things are easy enough to accomplish. However, I asked myself how could I achieve the same effect without mechanics but with the mind alone. That’s what I opened this post with, my “here’s how I would accomplish the same effect” musings . . . well, more than musings, I’ve done the exact same thing with a whole lot of people . . . been there, done that, teach the class so to speak.

Yes, I do indeed teach classes on this sort of thing . . . a LOT of classes on this subject, it’s become one of my more interesting specialties and I’ve taught courses and workshops on the topic in various countries across the globe and have even had folks fly in from other countries to come to work with me in private tutorials . . . in fact, I recently taught a workshop on introductory concepts here in Taipei (when we’ve enough folks for a second one, we’re likely to open another session as well). In addition to my work in Taiwan, I’ve also taught formal and informal courses or workshops in erotic hypnosis in the United States, India, Malaysia, Hong Kong, and elsewhere and will be teaching a very special course as a special post-conference offering through .

For those with particular interests, learn about the Xanadu Consensual Power eXchange Hypnosis Collection at the introduction page here.