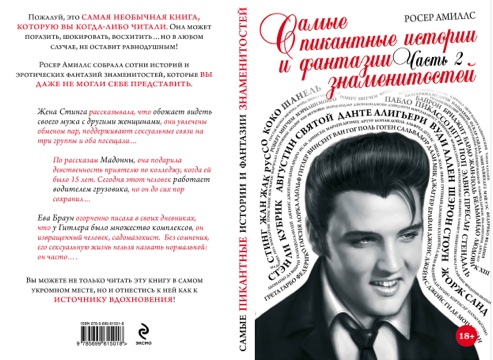 Roser Amills (Algaida, 1974) was born in Majorka. She is a writer and scince 1992 she has been working in Barcelona. Roser Amills has published four volumes of poetry and about 10 books on various topics. Since 1995 she has been working as a journalist and a blogger («Digital inspiration» at La Vanguardia and “My Sexy Corner” are her blogs), gives master class, performs on the stage, talks on the radio and TV, gives a consultation at the publishing house. Roser Amills won La Llanca 2011 and 2012 Omnium Cultural award

This is the most extraordinary title, which you have ever read. You can be shocked, surprised or admired by this book, but it will definitely touch your feelings!
Roser Amills has collected a hundred of stories and erotic fantasies from the celebrities, which you could hardly ever imagine!
Sting’s wife told that she liked to see her husband with other women. They both took interest in swing, maintained sexual relationships in three groups and visited…
Madonna gifted her virginity to her college boyfriend, when she was 15. Nowadays this guy is a lorry driver, who has still kept…
Eva Braun disappointedly wrote in her diaries, that Hitler had a lot of complexes, that he was a pervert and sadomasochist. There is no doubt, that his sexual life was not normal, as he frequently…
You can not only read this book in a recess, but be inspired by this as well!